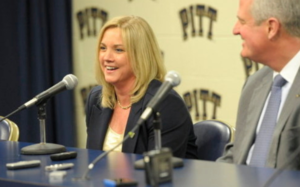 SLS Girls Basketball phenom, Pitt Women's Basketball Coach, and former Olympian will return to international competition in July when she coaches the Women's U18 National Team

The 2016 FIBA Americas U18 Championship will take place July 13-17 in Valdivia, Chile, where the top four finishing teams will earn a berth into the 2017 FIBA U19 World Championship.

"It's such an incredible honor to be named the head coach for USA Basketball," said McConnell-Serio, who won gold and silver medals as a player in the 1988 and 1992 Olympics. "I was shocked to be asked and also thankful that the committee selected me. You never imagine something like this happening, and when you're asked to do it, there is no hesitation because to represent your country and wear USA on your chest, there is no greater sense of pride. I am so excited to have this opportunity."

"With the age group and level of this competition, we felt it was imperative to get a strong teaching staff", said Jim Foster, coach at Tennessee-Chattanooga, and chairman of the committee. "Suzie McConnell-Serio is probably one of the most qualified coaches with a unique resume of high school, AAU, professional, mid-major and major conference coaching. She has long been known as someone who understood the game of basketball on many levels, both as a player and as a coach."