Stephen Flaherty, '78, inducted into Theatre Hall of Fame in NYC 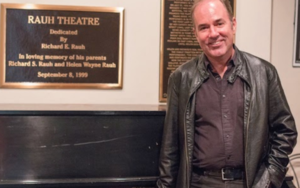 Flaherty was inducted for creating 10 musicals including the hit "Ragtime"

The below story originally appeared in the Pittsburgh Post-Gazette on November 17, 2015

NEW YORK – First up in the 45th induction ceremony into the Theater Hall of Fame in the upper lobby of Broadway's Gershwin Theatre, where the names of Hall members are emblazoned in gold, was brilliant and sometimes controversial playwright Tony Kushner ("Angels in America"). He expressed some amazement at his honor and tellingly quoted Yip Harburg's lyrics from "The Wizard of Oz," when Dorothy is introduced to the Emerald City:

In contrast, his presenter, actor Linda Emond, quoted director Mike Nichols, who said "Tony writes about what it means to be a good citizen." For herself, Ms. Emond, who starred in Mr. Kushner's "Homebody Kabul," said acting in a Kushner play "felt like flying."

Introducing them was emcee Estelle Parsons, herself a Hall member, who noted that the celebratory evening would be free of "the slings and arrows of outrageous critics" – which is partly ironic, because along with living members of the Hall, the electorate that votes on Hall selections is the membership of the American Theatre Critics Association.

This, however, is an evening that breezes along on a swell of good feeling and reminiscence. Ms. Parsons guided it briskly, introducing in each case a presenter who then introduced a new Hall inductee.

Playwright Alfred Uhry, an inductee last year, presented the team of Lynn Ahrens (lyrics) and Dormont-born Stephen Flaherty (music), creators of 10 musicals ("all completely different"), among them "Once on This Island," "Ragtime" and "Seussical." Searching for a similar long-lived musical theater collaboration, Mr. Uhry could come up only with Betty Comden and Adolph Green, with the difference that "Ahrens and Flaherty write the music, too."

In response, Ms. Ahrens remembered that Mr. Uhry had once given them the advice, good for musicals but also life, to "just let the show tell you what it wants to be." She said her partnership with Mr. Flaherty began in May 1983, when this "young, very shy composer yelled from half a block away, 'Hey, Lynn, do you want to write a song together?' "

She also cited the support of her mom, whom she called "the pin-prick in the bubble of joy." Her mother once said, "it's wonderful you're going to be honored by your colleagues, if not the critics" – but of course the Hall of Fame is both.

Mr. Flaherty, whose first job in the theater was as a rehearsal pianist for Pittsburgh CLO, said, "I never wanted to do anything other than to tell stories in music." He cited the influence of his parents' love of music and gave credit to his partner of 25 years, Trevor Hardwick, and two early Pittsburgh mentors, Bill Crystal, his first music teacher, and Ted White, his theater teacher at Pittsburgh's South Hills Catholic High School.

In two cases, the inductee was absent. Rick Elice spoke for the late actor Roger Rees, his life partner of 35 years. Mr. Rees had a difficult youth in a tough part of South London and gradually found his way to acting via art school and painting scenery. He was cast in his first part because an actor was ill and he fit the costume; when he complained that his salary then dropped by 5 pounds, he was told that "with acting comes applause."

He went on to be hired by the Royal Shakespeare Company on his second try, in a group that included Ben Kingsley, playing spear carriers for four years. When his father died, Mr. Rees discovered he had always carried a small book of poems in his pocket, evidence that he had never known him at all – an insight into a father-son relationship that he used when he played another son of a distant father, Hamlet.

Mr. Rees made his initial impression in America playing the title role in "Nicholas Nickleby." Later he moved here, ultimately becoming an American citizen. Most recently, Mr. Elice wrote and Mr. Rees co-directed "Peter and the Starcatcher" on Broadway.

Philip Birsh, publisher of Playbill, presented legendary Broadway publicist Merle Debuskey, 92, "the ultimate Broadway insider," who starting in 1951 represented 550 plays and musicals, including more than 300 on Broadway, the record. In addition, he was "a rabble-rouser," an All-American lacrosse player, fought in World War II and "can discuss a Homer epic or an epic homer" with equal authority.

A noted ironist with a heart of gold, Mr. Debuskey spoke of the recent outrages in Paris but allowed how "maybe man's evolution wasn't a total waste of time."

Thomas Schumacher, president of Disney Theatrical Group, presented Julie Taymor, the conceiver, director and designer of "The Lion King." "In 1995, most thought we were insane to take 'Lion King' to Broadway. . . . But for some reason, Julie said, 'Yes.' " And in 1998 she won a Tony Award for directing — the first woman to do so, which is a shocking fact on its own.

"I'm a theater baby, I've been in it since I was 8," said Ms. Taymor, who also has worked extensively in film. "The theater is where I was born and I will die," she said: "theater is ephemeral but it can change your life."

She spoke of "the incredible power this [theatrical] community has to communicate: we are the shamans," and she gave special credit to the adventuresome producers, from Ellen Stewart and Joe Papp onward, who support new work.

The other inductee not present was actor Stacy Keach, stuck in Los Angeles working on a film. Nominated for a Tony 46 years ago, Mr. Keach has since played one great role after another across the country at regional theaters and on tour. Speaking for him was distinguished actor Harris Yulin, who read his thanks: "Fortunately, I'm working. . . . At 74, I'm glad I didn't peak before my time."

Director Susan Stroman, an inductee last year, presented the prolific lighting designer Ken Billington, who has just completed his 97th Broadway show. "I can make up the most beautiful dance steps or sequence of jokes," she said, "but if it isn't lit right, no one will notice."

Mr. Billington noted that he's just the fourth lighting designer in the Hall, after Tharon Musser, Abe Feder and Jules Fisher. He remembered that the first Broadway show he saw when young was "The Music Man" at the Majestic Theater, and he vowed he would come back and do a show at the Majestic himself. But now, 97 shows later, the Majestic is just about the only Broadway theater where he hasn't worked.

The final inductee, director Robert Falls, was supposed to have been presented by actor Brian Dennehy, but Mr. Dennehy also was stuck working on a film, so the pinch hitter was Roche Schulfer, long-time executive director of Chicago's Goodman Theatre, of which Mr. Falls has been artistic director since 1986.

Mr. Schulfer read remarks by Mr. Dennehy, who remembered that when they first met, Mr. Falls had said, "Brian, we're going to work together. And we're only doing the hard [plays], the ones we're not sure we can do." What followed was a long collection of classics, plus "a million laughs, a thousand arguments, a substantial amount of booze, and the best years of my life."

Mr. Falls spoke of his youth in a tiny Midwestern town, with parents very like Arthur Miller's Willy Loman and Eugene O'Neill's Mary Tyrone. In a fitting finale to the evening, he cited connections to each of the evening's other inductees and seconded Ms. Taymor in paying tribute to all those risk-taking producers, "very brave people, all of them."

The producer of the Hall of Fame is Terry Hodge Taylor, who followed up the ceremony with a dinner for all, allowing congratulations and memories to continue on into the night.