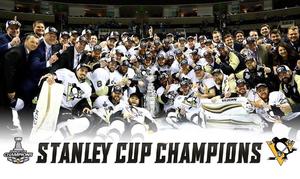 David Morehouse is the CEO and President of the Pittsburgh Penguins

Morehouse is the Chief Executive Officer and President of the Pittsburgh Penguins, overseeing every aspect of the team's operations.

Since Morehouse was named President in April 2007, the Penguins have reshaped their image and strategic vision with an emphasis on branding, fan relations, youth marketing, community interaction, corporate outreach and innovative technology. He reports directly to co-owners Mario Lemieux and Ron Burkle.

The Penguins have led all US-based NHL teams in local television ratings for five consecutive seasons. In 2012-13, the Penguins' rating of 12.66 was the highest achieved by any US-based NHL, NBA or MLB team on a regional sports network since 2002. Keeping with that trend, the Penguins rank among NHL leaders in website traffic and social media followers while continually setting new standards for merchandise sales.

The Penguins have sold out every game for over seven seasons, a streak that had reached 224 games before the start of the 2014-15 season.

The Pittsburgh native joined the Penguins in 2014 as Senior Consultant on the new arena project, following a career in national politics that included two stints at the White House, Pentagon and on Capitol Hill, as well as key roles in two Presidential Campaigns.