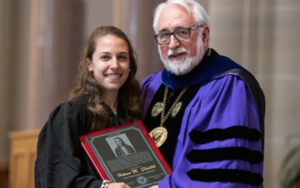 Shoplik was honored for her excellence in academics, leadership, and service

"Because of her sincere and enthusiastic love of learning, evidenced by her excellent academic success; for taking advantage of many undergraduate research opportunities – from her summer internship to her presentations at conferences, the quality of which was recognized by the American Psychological Society; for embracing the responsibilities of leadership as captain of the conference champion lacrosse team; for her active participation in the Psi Chi Honor Society, Student Athlete Advisory Committee, Orientation Committee and other campus activities; as a Fred Rogers Scholar who understands Fred Rogers' legacy in child development and will apply that in her profession; for her musical talents; for extending her language study to Latin and Polish; for her motivation, initiative and dedication exemplifying the Catholic, Benedictine, liberal arts values of Saint Vincent College, it is my honor as President of Saint Vincent College, to confer upon Helena M. Shoplik the President's Award, this 20th day of April, 2016," College President Br. Norman W. Hipps, O.S.B., read from the official citation presented at the spring Honors Convocation on April 20 in the Basilica.

Shoplik has been active as a member of the women's varsity lacrosse team and captain for two years, vice president of the Student Athlete Advisory Committee and a Eucharistic Minister for Campus Ministry.

A Fred Rogers Scholar, she was also recognized as a member of Who's Who among Students in American Colleges and Universities. A recipient of an A. J. Palumbo Student Research Endowment grant, she was also the recipient of a summer research grant in 2015 from the Association for Psychological Science. She presented her research at the annual meeting of the Eastern Psychological Association in 2015.

Shoplik has been a volunteer for Sports Friendship Day and the Mister Rogers' Neighborhood planetarium shows and has participated in the National March for Life for three years.

After graduation she plans to attend the University of Maryland and pursue a Ph.D. in school psychology.

A 2012 graduate of Seton-La Salle Catholic High School, she is the daughter of Ann and Michael Shoplik. She is a member of St. Thomas More Parish, Bethel Park.