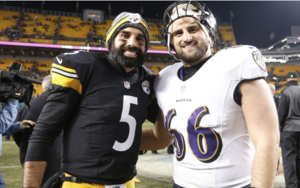 PITTSBURGH - Bruce Gradkowski was all smiles as he called it a "blessing" to be back with the Steelers and participating in organized team activities, something that would make most NFL veterans do a double-take.

Seven months removed from surgery on his throwing shoulder, Gradkowski knows how precious his playing days are. The veteran backup quarterback, a Green Tree native and Seton LaSalle graduate, is thrilled to have the opportunity to play an 11th season.

"It's good to be back out here with the guys," Gradkowski said Thursday at Rooney UPMC Sports Complex. "I had a year off from football, so to get back to the grind and get the timing and rhythm back, it's good to get back to practicing."

Gradkowski is grateful that, during his down time, the Steelers encouraged him to remain active in meetings. He thanked Steelers coach Mike Tomlin, offensive coordinator Todd Haley and quarterbacks coach Randy Fichtner for allowing him to have a role with the team. There was concern as to whether he could return from surgery on his throwing shoulder at age 33 and be a viable candidate as a backup.

When Gradkowski was a Cincinnati Bengal, he talked about the life lessons he learned at Seton LaSalle that allowed him to have success in the NFL.

Now Gradkowski is a Panther after signing a three-year contract on the first full day of free agency.

The brother of journeyman backup quarterback Bruce Gradkowski, was a fourth-round draft choice by the Ravens in 2012 from the University of Delaware. He played in 40 games in three seasons with the Ravens, starting all 16 games at center in 2013. He was traded to the Denver Broncos following the 2014 season, but the Broncos waived him prior to the regular season opener, and the Falcons claimed him ahead of the Panthers on the waiver wire. Gradkowski played three games with one start for Atlanta in 2015.

"It's very important for me to be that type of player, to be able to do whatever I'm asked to do," he said. "I like to think of myself as a guy who prepares well and is knowledgeable but also a guy who has the toughness and the quickness that it takes.

"I'm excited about getting better and growing as a player here."