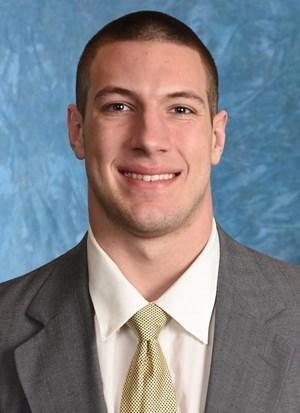 Scott Orndoff, '13, played a key roll in the University of Pittsburgh's upset win, 43-42, over No.2-ranked Clemson

Story originally appeared in the South Hills Almanac on November 14, 2016

During the game played this past Saturday, Nov. 12 in "Death Valley," the Seton-La Salle High School graduate caught a career-high nine passes for 128 yards. Orndoff also had a 55-yard touchdown reception in the second quarter. His two receptions of 21 and four yards helped to set up the decisive score, a 48-yard field goal by Chris Blewitt with six seconds remaining in the game.

In addition, the senior tight end amassed his first career 100-yard receiving game in the victory. Plus, it was the first time in his career that he had two TD grabs.

Those numbers didn't matter as much to Orndoff as the final score.

"I'm so happy for my teammates," the Waynesburg native said. "This is my last year and it's as big a win as I have ever had. As big a win as the program as had. I'm on cloud nine.

"We knew it wasn't going to be easy but (the win) didn't come as a surprise to us. We have confidence in our ability."

Orndoff certainly has demonstrated ability throughout his playing career. In 10 games this season, the 6-5, 255-pound tight end has 30 receptions for 482 yards and four scores. He averages 48.2 yards per game and 16.1 yards per catch. So far in his career, he has 53 receptions for 800 yards and 12 scores.

Considered one of the nation's top 20 tight ends out of high school, Orndoff led Seton-La Salle to a combined 20-3 record, including a pair of berths in the WPIAL Class AA playoffs. A two-time all-state selection, he had 35 catches for 625 yards over his junior and senior seasons as a Rebel.

The 22-year-old son of R. Scott and Beverly Orndoff is an administration of justice major.

Bishop Canevin's football season came to an end when the Crusaders lost to Northgate, 41-0, on Nov. 11 in a WPIAL Class A playoff game at Hampton.

Stefon Adams led to Canevin's downfall. He passed for 134 yards and two scores. He also rushed for a 62-yard touchdown.

In the win, Zach Walker excelled defensively. The South Fayette High School graduate recorded 10 tackles. He had nine solo stops and one tackle for loss (TFL). Previously, Walker netted male Athlete of the Week honors for 10 tackles in a 17-7 win against Geneva on Nov. 5. He also recorded one TFL, a sack and forced a fumble to help anchor a defensive unit that did not surrender a point over the final 37:13 of the game.