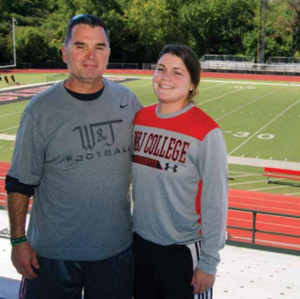 Two of our SLS grads, Bill Gallagher '75 and his daughter Maeve Gallagher '08 are both now athletics coaches at Washington & Jefferson college. Bill coached all around his home neighborhood of Brookline, including at Seton LaSalle. And thanks to an early start in athletics, Maeve has formed an inseparable bond with her father through sports. Check out the story, originally from Washington & Jefferson College's Fall 2016 Magazine:

But what exactly does 'horse' mean to Bill?

It has become a badge of honor around the W&J Athletics Department to have Bill Gallagher call you 'horse.' It means he trusts you. It means you are important to him.

Maeve has long been a horse to Bill, and they've shared a bond through athletics for much of her life.

Bill was a successful high school football coach for decades and is a former national high school coach of the year. His 2002 team at Perry Traditional Academy in the Pittsburgh City League recorded an impressive 13 consecutive shutouts. Bill was lucky enough to spend his last two seasons as the associate head coach at his high school alma mater, Seton LaSalle.

Maeve was the first Gallagher to become a coach at W&J, at the start of the 2015-16 school year. After a standout career as a three-sport athlete at Point Park University, she accepted a graduate assistant soccer coaching position at the University of Mount Union in Alliance, Ohio. But the proud Brookline, Pennsylvania native longed for western Pennsylvania and believed her future was in basketball. As luck would have it, a close friend used to work for W&J women's basketball head coach, Jina DeRubbo, and that friend talked with Maeve and DeRubbo when a position opened up.

Maeve had a feeling that the experiences she would have at W&J could benefit her in a variety of ways. 'Having a chance to work under someone with Coach DeRubbo's resume was something I knew would benefit me on and off the court and that's proven to be 100 percent true,' she said.

Maeve had always wanted her father, a lifelong high school educator, to try coaching at the collegiate level. Once she was on campus at her father's alma mater, she had the opportunity to put the wheels in motion for her father to make the move to become a college football coach.

'I guess Maeve felt like she owed me one. She had lunch with [W&J football Head] Coach [Mike] Sirianni and had some discussions that came to bear fruit,' Bill said.

Maeve has always joked with her family that she was her dad's favorite child because of the bond created through sports. She grew up going to football camp with her dad and the team in the summer.

After suiting up and going through drills with the team for years, Maeve decided in eighth grade that she wanted to play tackle football. 'I was sort of against it, but I didn't want to come out and say it,' said Bill. 'But my wife Nancy said, 'let her play, let her play.' So we did and she played for the Brookline Knights for her eighth-grade year. It was pretty cool to watch.'

Maeve, who played soccer, basketball and softball at Point Park, chimed in. 'I was pretty good, too.' As the pair shares a heartfelt laugh, the bond between them becomes even more evident.

The elder Gallagher has thought about what it means to return to his alma mater. 'I told the kids my favorite movie is 'The Lion King.' It's like the circle of life. I thought it was a pretty cool way to finish out my coaching career,' Bill said of returning to coach on the field where he played his college games.

'I have always looked at coaching as teaching. I always received much more than I gave kids. I worked with all types of kids and backgrounds...and when you get to work with them you get to see an awful lot of the good in people, and that's the enjoyment I get from it.'

All along, Bill has never forgotten where he came from. He's proud to be from the Brookline neighborhood of Pittsburgh.

He's also a proud W&J alumnus who truly values the college experience he was able to have.

'This was such an awesome institution to attend. I think the [NCAA] Division III experience is so cool. I've always said that graduating from W&J makes you feel like a renaissance man. You're experienced in everything and you become a lifelong learner,' Bill said.

The relationships he developed were also a valuable part of his time as a student.

'I was able to meet really dear friends to me that have been so for almost 40 years. We will stay in touch and get together. There's tremendous loyalty through thick and thin here.'

For Bill, there's only one word to describe those people: horse."