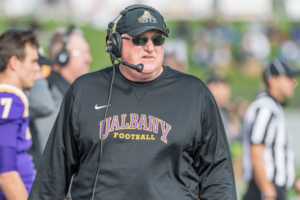 While the pair started out as friends at SLS, their Pittsburgh ties are strong and their paths have crossed several times during their professional careers.
Photo courtesy of Bill Ziskin, University of Albany

Greg Gattuso, '80, and Jim Sweeney, '80, were recently featured in the Post-Gazette for their Pittsburgh ties as coaches of the University of Albany football team. While they started out as classmates, Gattuso and Sweeney have remained friends and crossed paths several times in their professional careers. Read the full story in the Post-Gazette HERE.

Greg Gattuso
Greg left Pittsburgh to play football at Penn State as a defensive lineman. Two years after concluding his playing career, Gattuso took a coaching position at Duquesne University, where he coached for 12 years. Gattuso then took a coaching position at Pitt on Dave Wannstedt's staff. He accepted his role as head coach of the University of Albany football team, where he has been coaching the past five years.

Jim Sweeney
Jim stayed in Pittsburgh, playing college football at Pitt. After graduation, he was a second round draft pick for the New York Jets and played 16 years in the NFL on the offensive line — he played his last four seasons with the Pittsburgh Steelers. Sweeney then went on to join Gattuso as a coach at Duquesne University, before eventually coaching at Peters Township High School and South Fayette High School. Now, Gattuso and Sweeney are together again on the coaching staff of the University of Albany Great Danes.