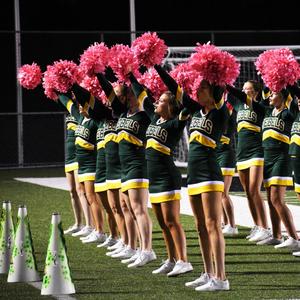 Seton LaSalle is excited to announce our new Head Cheerleading Coach, Ms. Lauren Ziegler. Coach Ziegler is a 2010 graduate of SLS and has an extensive cheerleading background. She was a four-year Varsity cheerleader at SLS, while also cheering competitively at a local All-Star gym, making Nationals and Worlds appearances.
After graduation, she went on to cheer at Slippery Rock University, where she obtained her degree in Early Childhood and Special Education. She holds two National Runner-Up UCA College National titles from her time at SRU. Simultaneously, she was coaching at her All-Star gym, while also working cheer camps and choreographing routines throughout the northeast region.
In 2014, Coach Ziegler moved to South Florida to teach elementary education. She continued her passion for coaching, taking on a high school cheer program. She helped lead this team to a Florida State Championship title and a UCA National High School Cheerleading Championship Runner-Up title during her time as coach. She is currently employed by Varsity Spirit, the nation's leader in the cheerleading industry. Welcome back, Coach Ziegler.