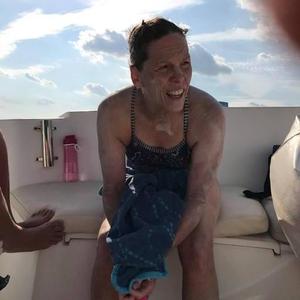 Mrs. Judy Caves, who serves as Guidance Counselor for our juniors and seniors, competed in the New York Open Water 20 Bridges Marathon on Saturday, July 14, 2018. Judy was joined by 14 other swimmers, representing nine countries, to swim the 28.5-mile marathon. Judy circumnavigated Manhattan, swimming through the East River and the Hudson River, and she finished with an astounding time of 8 hours and 4 minutes.

Above: Mrs. Judy Caves after the marathon, pictured with her kayaker, Sean, who stayed by her side throughout the marathon.

Congratulations, Judy -- we are so proud of you! The entire Seton LaSalle community is inspired by you!

UPDATE: Check out this Pittsburgh Post-Gazette story about Judy's inspiring swim. Judy was WTAE's Action Athlete of the Week on Friday, July 20.

New York is a common summer destination. But, when Mrs. Judy Caves arrived in New York this weekend, it was not to visit Times Square or the Empire State building -- it was to swim around Manhattan. Caves participated in New York Open Water's elite swimmers event 20 Bridges, a swim that goes under 20 bridges and circumnavigates Manhattan. Each year 60 swimmers are accepted to the 28.5 mile race, which takes place 4 times throughout the summer, with 15 athletes in each swim. The July 15th swim featured swimmers from across the world, from Gibraltar to Peru.

Caves completed the race in an impressive 8 hours and 4 minutes of continuous swimming. Given that feat, you might be picturing a young olympian, but Caves is no Michael Phelps. She is a guidance counselor at Seton LaSalle Catholic High School. Her start in swimming was inauspicious. Though she swam in high school and college at a Division III school, she was not remarkable.

Caves recalls, "I was not the best, not the fastest." She was, however, tenacious.

"I love a challenge," Caves says.

A decade ago she began pursuing open water events of increasing difficulty: a 4 mile swim across the Chesapeake Bay, a 12.5 mile swim around Key West. She set her sights on 20 Bridges and began training. She would rise at 4:30 to swim an hour and a half before work, then in the evenings would cross train or swim another 2 hours. Her drive and hard work is infectious and influences the way she approaches the students she counsels.

Caves shares, "I don't ever really deem that I have athletic gifts: what I've done has been through hard work." When students come to her office she encourages them, "If I can get up at 4:30 in the morning and go swimming, anything is possible. If you have a goal, put that goal out there and start pursuing it." She reminds students to break goals down and tackle them one step at a time.

Caves also emphasizes gratitude and faith. During her swim on Saturday, she spent her time praying for others. She also chose to focus on the things that were going well; rather than dwelling on the pain in her shoulder, she noticed that her goggles weren't fogging up and the water was warm. "You can choose what to pay attention to."