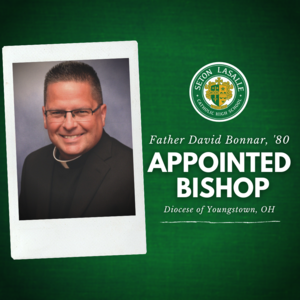 "Father Dave" will be the sixth Bishop of the Diocese of Youngstown.
Father David Bonnar, '80, currently pastor of Saint Aidan Parish in Wexford, PA, will become the new Bishop of the Diocese of Youngstown. The announcement was made on November 17.
"I am overwhelmed by the trust and confidence the Holy Father has placed in me in appointing me the Bishop of Youngstown," Fr. Bonnar said in a press release. He joins a long line of Pittsburgh priests who have been called to serve the Church beyond the Diocese of Pittsburgh, including Archbishop Bernard Hebda, '77.
Father Bonnar will be ordained as a Bishop and will be installed during the celebration of Holy Mass at Saint Columba Cathedral in Youngstown, OH on January 12 at 2 p.m. He will oversee a Diocese made up of nearly 200,000 Catholics in six counties across northeast Ohio.
Father Bonnar, one of five children, attended Duquesne University after graduating from Seton LaSalle, where he earned his B.A. in Social Communications. During his senior year, he entered the formation program at Saint Paul Seminary and was sent to the North American College in Rome and received an S.T.B. from the Pontifical Gregorian University.
He was ordained a transitional deacon on April 14, 1988 in Saint Peter's Basilica, Rome, and was ordained a priest on July 23 of the same year in his home parish of Saint Gabriel of the Sorrowful Virgin in Whitehall, PA.
Father Bonnar is joined by Archbishop Bernard Hebda, '77 (Archdiocese of St. Paul and Minneapolis), and Bishop Donald Lippert, '75 (Diocese of Mendi, Papua New Guinea), who have been called to serve the Church beyond our Diocese.
We are thrilled to share this accomplishment, and our prayers are with Father Bonnar as he embarks on this next chapter in Youngstown.
Published November 17, 2020