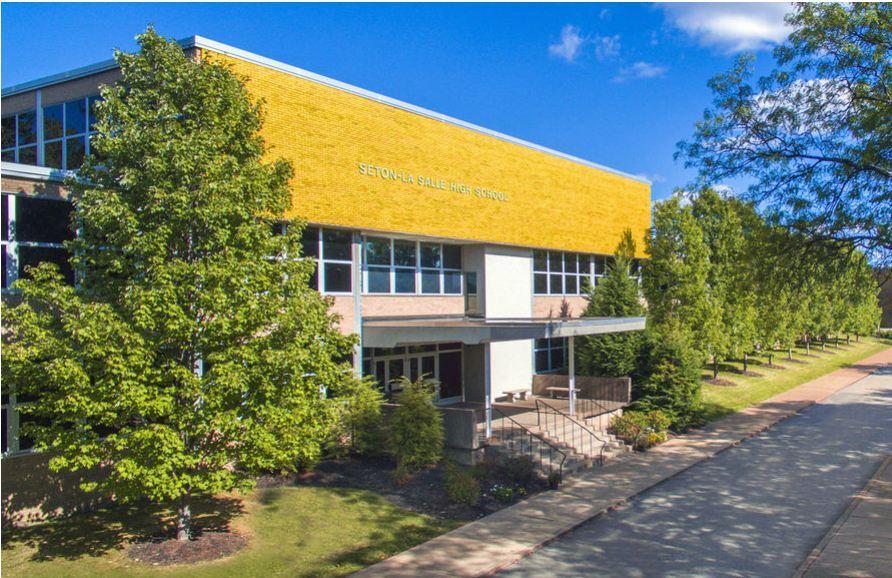 As the first coeducational diocesan high school in Pittsburgh, Seton LaSalle was originally established to serve the parishes of the South Hills. However, in the decades that followed, the school has attracted a growing community with some of the brightest and most talented students in the region.

Blessed with a long tradition of excellence, today we are one of the most diverse and inclusive student bodies in the entire region. Our students enjoy the energy and enthusiasm of our community, and our commitment to shared success that makes an education at Seton LaSalle a life-building experience unlike any other. 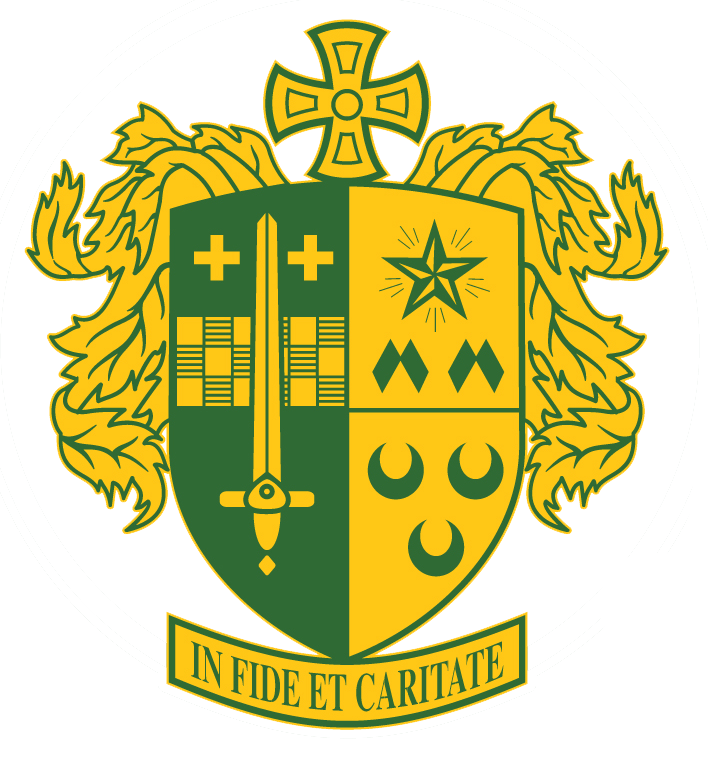 The Coat of Arms of Seton LaSalle Catholic High School, which signifies it as an institution of the Roman Catholic Diocese of Pittsburgh, and a merger of the former Elizabeth Seton High School for girls and the former South Hills Catholic High School for boys, is composed of the shield and its charges surmounted by a cross and the motto beneath the shield.
The heraldic shield is divided into three parts. The left partition is a replica of the shield of the coat of arms of the Diocese of Pittsburgh, which is based on the coat of arms of William Penn, the founder of Pennsylvania, and of William Pitt, for whom Pittsburgh is named. It is described as being “argent” (silver), on a fess (horizontal band) sable (the color black—represented in heraldic engraving by crossing vertical and horizontal lines to produce dark shading). The blue and silver checkered fess also appears in the shield of the City of Pittsburgh and appeared in the shield of the former South Hills Catholic High School. To differentiate the diocesan coat of arms, a sword of gold (designated in heraldic engraving by speckling) has been added. The sword is used in Christian art as the symbol of Saint Paul the Apostle, the patron of the Diocese. The two rounded gold crosses are a Christianized version of plates found on Penn’s coat of arms. The entire left partition expresses the jurisdiction of the Diocese of Pittsburgh.

The right partition displays an upper half blue field (background), designated in heraldic engraving by horizontal lines, with a silver star and two gold broken chevrons. The star is taken from the seal of the Institute of the Brothers of the Christian Schools and also appeared on the shield of South Hills Catholic. This seal, which can be traced back as far as the Brothers’ General Chapter of 1751, recalls the Old Testament passage in the Book of Daniel (12:8) which says, “They that instruct many unto justice, shall shine as stars for all eternity.” The two gold broken chevrons are taken from the coat of arms of the House of De LaSalle, the Spanish ancestors of Saint John Baptist de LaSalle, the Founder of the Christian Brothers, and patron of teachers.

The lower half of the right partition depicts three crescents of red (designated in heraldic engraving by vertical lines), on a field of gold. These are the traditional arms of the Seton Family of Scotland, and appeared in the lower right partition of the shield of Elizabeth Seton High School. The Seton Family was famous in the Catholic history of Scotland and it was into this illustrious family that Saint Elizabeth Ann (Bayley) married and brought new luster to this noble name, when she founded the American Sisters of Charity.

John Baptist de La Salle, the Founder of the Brothers of the Christian Schools, was born in Reims, France on April 30, 1651. He was only sixteen when he became canon of Reims Cathedral. He was ordained a priest at the age of twenty-seven, on April 9, 1678. Soon afterwards, he found himself helping a group of teachers who were looking after poor children in the city. He gradually became more involved, seeing to their needs, organizing their lives and assisting in their teaching. He concerned himself with improving their preparation as educators. When people saw the good done by these teachers under his management he received requests to open schools in other towns. More importantly, young men asked to live their lives as educators like those who were living with John Baptist. Hearing God's call to trust him completely, John Baptist gave up everything: his canonry, as well as his inheritance by supplying food to the starving during the famine of 1683 and 1684. Finally, he was as poor as the children attending his schools and as the teachers whom he was now able to advise to trust entirely in God.

The Institute of the "Brothers of the Christian Schools" gradually evolved. This congregation was unique, for its members, though belonging to a religious order, were laymen, who spent all their energy and the whole of their lives in educating children, especially those who were very poor. He encountered many obstacles, but remained firm to his mission, his community and his vocation.  In the midst of all this, he resolutely kept his vision on just one goal: the WILL OF GOD. And God's Will was in the end accomplished, for when on April 7, 1719 at the age of 68, Our Lord called John Baptist to Himself, the Brothers' Institute had spread throughout France, and the schools were performing excellent work.

John Baptist de La Salle was historically one of the greatest practical pioneers of education for ordinary people, first in France and later in the rest of the world. His imaginative ideas, the schools he founded and the reforms he made in teaching completely changed the educational system. He composed reading books and wrote others for children and families on religious formation and good manners. A great contribution of his was the teacher-training manuals and spiritual writings he produced for the Brothers and other Christian teachers. John Baptist de La Salle was canonized on May 24, 1900 and on May 15, 1950 Pope Pius XII announced that he was to be known in the future as the: "Special Patron of all Christian Educators."

Elizabeth Bayley Seton was the first native-born American to be canonized by the Catholic Church. Born in 1774, two years before the American Revolution, Elizabeth grew up in the "cream" of New York society. She was a prolific reader, and read everything from the Bible to contemporary novels. In spite of her high society background, Elizabeth's early life was quiet, simple, and often lonely. As she grew a little older, the Bible was to become her continual instruction, support and comfort; she would continue to love the Scriptures for the rest of her life. In 1794, Elizabeth married the wealthy young William Seton, with whom she was deeply in love. The first years of their marriage were happy and prosperous.

This time of Elizabeth's life was to be a brief moment of earthly happiness before the many deaths and partings she was to suffer. Within four years, Will's father died, leaving the young couple in charge of Will's seven half-brothers and sisters, as well as the family's importing business. Both Will's business and his health failed. He was finally forced to file a petition of bankruptcy. In a final attempt to save Will's health, the Setons sailed for Italy, where Will had business friends. Will died of tuberculosis while in Italy. Elizabeth's one consolation was that Will had recently awakened to the things of God.

The many enforced separations from dear ones by death and distance, served to draw Elizabeth's heart to God and eternity. The accepting and embracing of God's will - "The Will," as she called it - would be a keynote in her spiritual life. Elizabeth's deep concern for the spiritual welfare of her family and friends eventually led her into the Catholic Church. In Italy, Elizabeth captivated everyone by her own kindness, patience, good sense, wit and courtesy. Having lost her mother at an early age, Elizabeth felt great comfort in the idea that the Blessed Virgin was truly her mother. She asked the Blessed Virgin to guide her to the True Faith. Elizabeth joined the Catholic Church in 1805.

At the suggestion of the president of St. Mary's College in Baltimore, Maryland, Elizabeth started a school in that city. She and two other young women, who helped her in her work, began plans for a Sisterhood. They established the first free Catholic school in America. When the young community adopted their rule, they made provisions for Elizabeth to continue raising her children. On March 25, 1809, Elizabeth Seton pronounced her vows of poverty, chastity, and obedience, binding for one year. From that time she was called Mother Seton.